Deruta for Umbrian ceramics and pottery

Its origins, as for the Raffaellesco, date back to the Renaissance period. The painters of that time commonly copied the decorations of great contemporary artists, such as Raphael and his master Pietro Vannucci called the Perugino. We can identify the bloomed scrolls and the blue arabesque characterising this style in the frescoes of these two artists.

a very common style, derived from the patterns on ware imported from the east in the 15 C.

The origins of the town of Deruta are for the most part obscure. It has always had important links to Perugia, which acts as a powerful bastion to the south and with Todi, another fortified town further south towards Rome.

During the 13 C Deruta had its own statutes, followed in 1465 by a new document written in the vernacular which mandated the presence in the castle of four "boni omini", elected by and from among the residents, in addition to the podestà delegated from Perugia. In the second half of the 15 C, the residents were decimated by plague, and the city walls collapsed through lack of maintenance. In addition, during the "Guerra del Sale" (1540), Deruta, which had aligned itself against the Pope, was attacked and devastated. However, the submission of Perugia to the Church also brought a long period of peace to Deruta. During these years of peace, Deruta became famous for the high quality of its majolica.

Early furnaces are evident as one enters the historical centre of Deruta through the Porta di S. Michele Arcangelo. In the small Piazza Biordo Michelotti one may view the sober lines of the gotho-romanesque church of S. Arcangelo, in front of which there is a fine polygonal fountain dating from 1848. 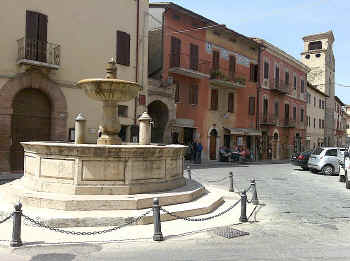 Next is Piazza dei Consoli, where the Palazzetto Municipale, dating from 1300, is located. Its atrium houses a collection of neolithic and Etruscan archaeological finds. The Palazzo houses, in addition, the Pinacoteca and the Museum of Ceramics. The Pinacoteca contains an important collection of paintings originating from the churches of S. Francesco, S. Antonio, the Defunti di Ripabianca and the hospital of S. Giacomo, and also a part from the rich collection of Lione Pascoli. Paintings of the Alunno, the Baciccio, Stendardo, Amorosi, Fiorenzo di Lorenzo and Guido Reni are on display. The Museum of Ceramics houses a magnificent display of ceramic works of art from archaic to modern times.

In front of the Palazzo Municipale is the gothic Church of S. Francesco. The former Franciscan convent with its ancient cloister is located adjacent to the Church. At the end of the narrow Strada Mastro Giorgio rises the Church of S. Antonio which preserves important frescoes by Bartolomeo and Gian Battista Caporali. The small church of Madonna del Divino Amore, today known as Madonna della Cerasa is situated at the top end of Piazza Cavour. Along the Tiberina road one sees the small church of Madonna delle Piagge dating from 1601, the facade of which is adorned with beautiful maiolica. Close by to this church one may visit an interesting Majolica Museum.

Impruneta has been the source of Tuscan terracotta for centuries. In recent years, the art of painted terracotta has undergone a dramatic revival in Impruneta, and a significant proportion of the hand-painted pottery sold in Florence is produced in and around Impruneta. 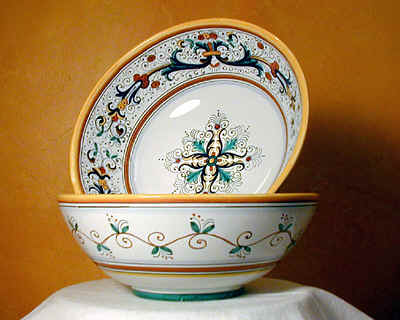